Multiplex cinema and "Made in Italy" to socialize the "seventh art".

Cinemas and multiplexes  "Made in Italy" design conquer "who loves" the "seventh art" and help to win the competition of illegal copies of movies.

Our team is highly motivated and constantly updated on developments of entertainment market as well as new trends in cinema halls and multiplexes.  It makes available its know-how for the realization of:

Our love for the "cinema as art" leads us to carefully consider what are the mechanisms of "cinema as business". This motivates us to find the best design strategies to maximize the profitability of movie theaters and supports us in contributing to the success of cinemas, multiplex cinemas, movie theaters, movie theater chains ... (see example of Starlight in Moscow with break-even point in 6 months).

Our aim to create design for multiplex cinema and movie theater able to exibit "cinema as art" , and art in all its forms, is stimulated by the term "cinema is the seventh art" coined by the italian intellectual Ricciotto Canudo in 1921.

This goal is supported by our assessment that the interest in the experience of art to live and share with other people is a human necessity born with humanity itself, and therefore will remain alive through the centuries.

We are confident that this methodology builds final customer's loyalty, creates income and helps to win the competition with streaming, video on demand, home theater, the down-load and illegal copying movies. 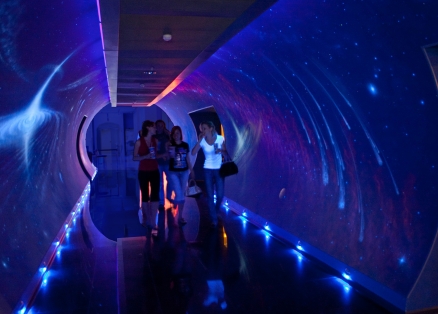 Obtained a five-year degree at the University of Architecture in Florence. The thesis has been performed at the Technical University of Monaco in Germany under the patronage of "European Project Erasmus" and earned a 110/110 voting with honors.

She transferred to Germany working in the Office of Urban Planning of Bernhard Winkler in Starnberg and there has started an apprenticeship that merged into a five-year collaboration.

She has passed the state exame to practice the profession of architect and has been a member of the Chamber of Architects Planners, Landscapers and Conservationists in Bologna.

She opened her own studio in Bologna in 1997, dealing with productions of works of art as well as the renovation of private buildings. Since 2000 she has designed hotels, restaurants, cinemas, multiplexes, places of public entertainment and entertainment in Italy, as well as sculptures made ​​site-specific.

She attended a specialization in "acoustics", "executive design of furniture and furnishings", a master's degree in "conservation and restoration theory", obtained a qualification of "certifier of energy consumption in buildings",  "safety coordinator in workplaces",  "responsible of safety, prevention and protection in workplaces", "certifier of safe and safety".

From 2005 to 2009 she was member of the Board of Directors in the Chamber of Architects, Planners, Landscapers and Conservationists in Bologna in which she leds the role of Treasurer. In this position she brought some innovations about security and transparency through a certified and publicised "Annual Budget" . She managed to get the lowering of the registration fees, for all the members of the Chamber of Architects, Planners, Landscapers and Conservationists, through systematic savings derived from the use of e-mail for each kind of communications .

From 2014 she is a member of the Disciplinary Commission, elected by the Court of Bologna.

She has a good knowledge of English, German and is studying Russian.